Expected to be operational by 2025, Eastman says it will be the world's biggest molecular recycling facility for waste plastics in France. 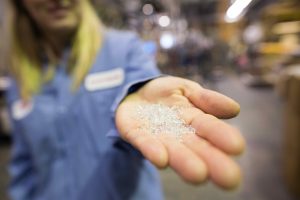 Eastman Chemical Co. plans to invest up to US$1 billion in a material-to-material molecular recycling facility in France that will use Eastman’s polyester renewal technology to recycle up to 160,000 metric tonnes annually of hard-to-recycle plastic waste that is currently being incinerated.

In a Jan. 17 news release, Eastman officials said the plant will be the world’s largest plastics recycling facility in France.

Officials with Eastman, Tenn.-based Eastman said the investment aligns with France’s work to recognize the role of molecular recycling and supporting investments in innovation, while at the same time accelerating the transition to a more circular economy for plastics in Europe.

The multi-phase project includes units that would prepare mixed plastic waste for processing, a methanolysis unit to depolymerize the waste, and polymer lines to create a variety of materials for specialty, packaging, and textile applications. Eastman also plans to establish an innovation center for molecular recycling that would enable France to sustain a leadership role in the circular economy. This innovation centre would advance alternative recycling methods and applications to curb plastic waste incineration and leave fossil feedstock in the ground. The plant and innovation center would be expected to be operational by 2025, Eastman said, creating employment for approximately 350 people and leading to an additional 1,500 indirect jobs in recycling, energy, and infrastructure.

“Eastman’s world-scale project will allow France to position itself as a European leader in new technologies for recycling and recovering plastic waste,” said Agnès Pannier-Runacher, French Delegate Minister for Industry. “This investment is the result of the ambitious approach to industrial reconquest led by the Government since 2017, which has enabled France to become the most attractive country in Europe from 2018 onward for industrial projects. With this project, which is an important step for our sovereignty, we are giving ourselves the means to achieve our ambitions in terms of ecological transition while creating sustainable jobs in manufacturing, infrastructure and energy. We look forward to developing this relationship with Eastman.”