Austria-based processing and auxiliary equipment maker Wittmann Battenfeld has established a new subsidiary in Poland to handle increasing sales in that country.

Wittmann Battenfeld Polska is based in the western Polish town of Grodzisk, and is headed by Bogdan Zabrzewski. The company employs a total of 18 associates. 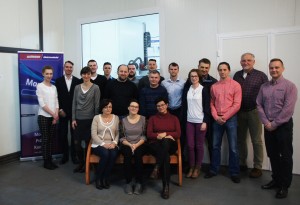 Bogdan Zabrzewski, managing director of the subsidiary (second from the right) and his team.

“The Wittmann Group has been successful on the Polish market for many years,” said Michael Wittmann, managing director of Wittmann Kunststoffgeräte GmbH. “With this subsidiary, we now have a powerful organization to serve the growing Polish market even better and more efficiently than before.”