“This is an amazing milestone and a tribute to our great team of robotics and automation specialists,” said David Preusse, president of Wittmann Battenfeld Inc., which is headquartered in Torrington, Conn. “We had set an initiative last year to push harder to reinforce our position as the leading supplier of robots to the plastics industry…and these efforts have paid off.”

Worldwide, Wittmann Battenfeld has built and shipped over 40,000 robots since it began operations 40 years ago in 1976. Wittmann began selling robots into the American market in 1986, and has since shipped over 6,000 robots in the U.S. 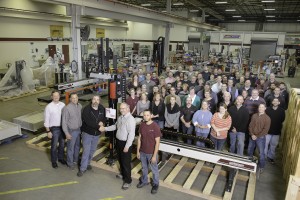