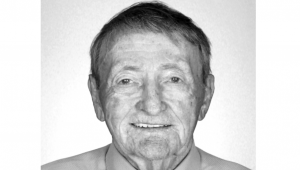 Peterson’s career in dry bulk solids began in the 1950s with Salina Manufacturing (now known as Coperion). As a mechanical engineer, Peterson developed a wide range of conveying equipment for the firm, including a patent on a “Y” type diverter valve and coupling system with a straight-line layout to reduce pressure losses in pneumatic conveying systems.

Paterson left Salina in 1977 to found Vortex with his son-in-law Lee Young, developing a new type of slide grate called an Orifice Gate. “The valve was designed to sheer through flowing material, self-clean on the opening stroke, and eliminate areas of build-up through the bore,” Vortex Global said in a statement. “The design also incorporated a shimming system, allowing factory maintenance personnel to perform simple adjustments to sealing tolerances while the valve remained in-line.”

The company received a patented on the Orifice Gate in 1980, and Peterson continued to develop new equipment until his retirement in 1989, including the Wye Line Diverter, Roller Gate, and Fill Pass Diverter. His last patent was granted in 1990 for the Clear Action Gate.