The company has nearly doubled the manufacturing space in its headquarters in Westerly, Rhode Island, where it builds custom single-screw extruders, extrusion systems, and screws. 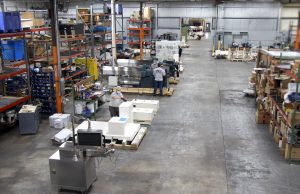 As part of what it calls “unprecedented growth”, US Extruders Inc. recently completed an expansion that nearly doubles the manufacturing space in its headquarters in Westerly, Rhode Island, where it builds custom single-screw extruders, extrusion systems, and screws.

The company now occupies just over 31,000 square feet of space at their facility, which runs 100 per cent on solar power. The expansion includes overhead cranes allowing for easier and more efficient extruder assembly.

And the firm – which projects its growth to be 25-30 per cent over the last year – has just expanded its sales force, appointing Nick Sharkey to manage sales in Canada and the Northeast U.S. Sharkey formerly worked for Roc Search in New York City, and was consistently a top performer and the second highest revenue producer in 2019 for a sales staff of 100.

Despite the difficulties of the current pandemic, US Extruders – which was deemed an essential business – has been working at full capacity and production. Cloud- based server and collaboration tools have allowed remote working and digital communication platforms have provided the ability for virtual meetings, wet tests and lab trials. Extruders continue to be shipped on time (or even early in some instances), and have included equipment that directly serves the need of PPE and essential industries.

“We see our growth directly tied to our commitment to providing the best extruder technology and equipment backed by unmatched customer support,” said Bill Kramer, US Extruders’ president.

ProSystems supplies US Extruders with full extruder controls and shares the same facility. ProSystems provides a wide range of controls from tailored discrete controls to advanced touch screen controls. Due to business growth, ProSystems has also increased their production space by almost 40 per cent during this same expansion.