Hot runner system and components maker Synventive Molding Solutions has completed an expansion and upgrade of its plant in Suzhou, China.

In a bid to further service the Asia Pacific market, hot runner system and components maker Synventive Molding Solutions has completed an expansion and upgrade of its plant in Suzhou, China.

The plant expansion is part of Barnes Group Inc.’s efforts to accelerate development of its molding business in the Asian market. Barnes bought Synventive in 2012. 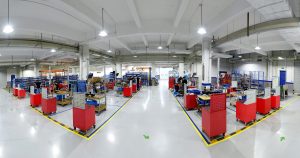 The shop floor at Synventive’s plant in Suzhou, China.

The new facility is adjacent to Synventive’s Suzhou plant, established in 2005 and located in Suzhou Industrial Park. In a statement, Synventive said it has reorganized the production and equipment layout of its two existing plants in Suzhou as well as optimized the material, information, and walk-flow at the site, resulting in reduced production cycles and faster product delivery. “Through increased space and additional injection molding machines and testing equipment, Synventive has also significantly enhanced its R&D capability in China as a part of the project,” the statement said.

“Our new facilities and equipment will undoubtedly sharpen our competitiveness,” said John Jofre, president of Synventive Asia.  “This expansion project demonstrates the strong commitment of Barnes Molding Solutions to the Chinese market.”