The Society of Plastics Engineers (SPE) has announced the winners of the SPE Thermoforming Division annual parts competition.

The awards were presented during the Thermoforming Division’s annual conference, held in September in Schaumburg, Ill. They were presented in twenty categories. The categories and winners are: 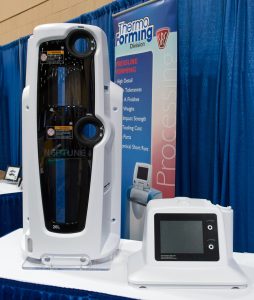 Roll Fed Consumer – Gold.  Jamestown Plastics, Brockton, N.Y., for the “Click it Clam.” “This innovative clamshell design has a patented locking feature which allows it to be easily opened and closed with one hand,” SPE said. “The user simply has to push on the lower part of the flange under the pin, which forces the wall to deflect, releasing the pin and allowing the lid to pop open. Simply snap the lid back down to close and it is secured when you hear the audible ‘click.’”

Roll Fed Consumer – Silver.  Transparent Container Company, Addison, Ill., for the “Sharpie Markers tray.” “The Sharpie .022 PVC tray was designed to be easily filled by hand with the 30 markers, yet still meet Walmart’s required external measurements,” SPE said. “This allowed the finished package to be easily stored and displayed onsite. The structural design of the PVC tray for the markers displays them in an orderly fashion and also provides a place for consumers to store them conveniently at home.  In addition, it keeps them secure during shipping and display at Walmart.”

Roll Fed Recycled – Gold.  Innovative Plastech Inc., Batavia, Ill., for the “Book and recorder clamshell.” “The book and recorder clamshell is a hanging package, designed to hold both a music book and a musical instrument for sale at retail stores,” SPE said. “The package is made from .020-inch clear recycled PVC. For security of contents while hanging, the clamshell is designed with 6 button snaps around the perimeter of the package. The platform snap loses its effectiveness with such a long package, so the button snaps provide additional consistent and sure closure. Once purchased, it can be repeatedly opened and shut by the customer so that it acts as a protective case for the instrument as well as the music book.”

Heavy Gauge Vacuum Form – Silver.  Electro-General Plastics, Grove City, Ohio, for the “Koala assembly.” “The koala ear withholds a metal bracket between the outer and inner koala ears to improve its strength and ease the assembly of on location install,” SPE said. “To construct the koala assembly, MP 55420 structural adhesive metal is used to bond the metal to the ABS and the 1707 Weld‐on adhesive is used to bond the ABS to the ABS. Many different glue brands were tested for the bonding of the koala ear parts. The 1707 ABS substrates (Weld‐on adhesive) changed the outer color to orange where the outer and inner ears had a tight fit. This was resolved by using 100 per cent silicone in these tight areas. This resolution fixates the three parts, inner ear, outer ear, and internal metal bracket, together to create one durable assembly.”

Heavy Gauge TPO – Silver.  Plastitel, Laval, Que., for the “Bus cargo doors.” “The bus manufacturer has always used FRP for many of its exterior parts,” SPE said. “All of its side skirts and baggage doors were converted from traditional FRP to a TPO using a twin sheet thermoforming process. Combining the TPO and twin sheet process reduced production time, removed the painting process, and improved the aesthetics.”

Heavy Gauge Value Add – Silver.  Allied Plastics, Twin Lakes, Wis., for the “Propeller case.” “The case had to be built very tough, because it needs to pass UPS shipping drop test standards,” SPE said. “This project started out as a single sheet case, but it was soon realized that a twin sheet design was needed to offer the robustness to protect the prop inside. The propeller is secured in the case by a nylon dowel and receiver.  The prop hub sits snugly on a receiver in the center of the base. High density foam, mounted on the dowel, fits between the propeller hub and top cover. The dowel – secured on the top half – fits within the receiver to interlock the propeller in place. The top and bottom halves of the case are secured by four steel locking clasps.”

Twin Sheet – Gold.  Associated Thermoforming, Berthoud, Colo., for the “Wheel chair shower.”  “The single oven twin-sheet process creates a part that is very strong, withstanding the point‐loading of a person in a wheelchair concentrated on the contact of the two wheels only,” SPE said. “The top surface has features molded in it to facilitate draining and the attachment of the walls and doors. Both parts are formed from 0.187-inch gauge virgin high gloss ABS.”