The awards were presented during the Thermoforming Division’s annual conference, which was held last week in Fort Worth, Tex.

Profile Plastics won both the People’s Choice Award and a Gold Award for Heavy Gauge Pressure Forming for a medical cart enclosure used in surgical procedures. The cart has 10 pressure formed enclosure parts: seven for the primary cart and three for a secondary car, with all parts utilizing PC‐ABS material in order to meet a stringent rigidity, chemical, heat, and highly cosmetic requirements. “The final design incorporated numerous movements on each tool to provide fastening features as well as cosmetic finished seams,” SPE said. “The primary cart’s interaction between the rear top cover and the side covers presented numerous challenges to achieve a hidden fastening system and maintain cosmetic alignment between the parts. Complex core pulls were utilized on the upper cover to incorporate slots for a work surface table. While the secondary cart’s large front cover presented numerous challenges with four‐way undercuts due to the extreme draw depth. The final design on this part allowed the elimination of additional side panels and reduced overall tooling cost.” 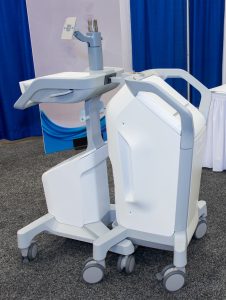 The other categories and winners are:

Roll Fed Innovative – Gold.  Placon won again for its nametag organizer application, a thermoformed tray that would hold name tags in several shapes and organize and display them for large meeting registrations. Placon designed a thermoformed tray from EcoStar recycled PET. The dual-purpose snap-fit closures connect two trays together to hold 100 name cards, twice the number of the existing product. Users can unsnap the closures to separate the two trays and get setups for two registration lines, arranged by alphabetic order.

Roll Fed Innovative – Silver.  CMI Plastics Inc., of Ayden, N.C., won for its Knob Creek point-of-purchase display tray, which is comprised of co-extruded ABS, 60 per cent of which is recycled utility black and 40 per cent is colour match brown. “The mix was carefully engineered with the goal of a natural gradient of black and brown colours, giving the tray a natural weathered look,” SPE said. “This also provided each tray with a unique finish so that each tray appears slightly different.”

Heavy Gauge Vacuum Form – Gold.  Fiber Pad Inc. of Tulsa, Okla., won for a shroud cover for the driver and passenger consoles on a bass boat, which also provides a surface to mount a windshield. Fiber Pad vacuum forms the shroud body using a custom-built machine that uses a “wrapping” method, which the company said provides larger undercuts that normally would be permitted with standard vacuum forming machines, plus maintains a more consistent material thickness across the overall part. The part, which is made of ABS, is trimmed on a five-axis CNC router.

Heavy Gauge Twin Sheet – Gold. Therma-Hexx Corp. of Portsmouth, N.H., won for its ThermaPANEL modular heat transfer system for heating and cooling exterior and interior surfaces. “It’s primarily used for highly efficient snow melting of pedestal and ground mounted pavements, and for collecting solar energy to heat swimming pools while cooling the pool patio, not achievable with tube‐based systems,” SPE said. “ThermaPANELS are twin-sheet thermoformed using polyethylene-raised temperature on a shuttle-type former with molds that allow for the creation of a multi-channel panel with stanchions and inlets that allow for even, turbulent flow of the hydronic fluid throughout the modular panel.”

Heavy Gauge Twin Sheet – Silver. Allied Plastics Inc. of Twin Lakes, Wis., won for a bear-resistant lid for a roll out cart. “The lid is twin‐sheet formed to provide a highly aesthetic, structurally rigid assembly for the enclosure of a 95‐gallon garbage can cart,” SPE said. “By using the twin-sheet process, the design team was able to make a much stronger lid but also have some flexibility when the bear would try and get into the cart. Upon release, the plastic immediately returns back to its formed state, not allowing the bears to gain access to the contents inside.”