The value of plastics machinery shipped by North American suppliers registered a solid rise in the second quarter of 2015, according to statistics compiled and reported by SPI: The Plastics Industry Trade Association.

The value of plastics machinery shipped by North American suppliers registered a solid rise in the second quarter of 2015, according to statistics compiled and reported by SPI: The Plastics Industry Trade Association’s Committee on Equipment Statistics (CES).

“The CES shipments data have steadily posted year-over-year gains in every quarter since 2010,” said Bill Wood, the economic analyst who reports on the plastics machinery markets for the CES. “This is a better performance than many other sectors of the U.S. and global economy. U.S. GDP will continue to grow at an annualized pace of at least 2 percent for the remainder of 2015, and the outlook is for accelerating growth in 2016. This bodes well for the plastics machinery markets because it will continue to generate rising aggregate demand.”

Shipments of primary plastics equipment (injection molding, single-screw extrusion, twin-screw extrusion, and blow molding equipment) for reporting companies totaled US$303.5 million in Q2. This was an increase of 5.5 per cent from the shipments total of US$287.7 million in Q1 of 2015, and it was a gain of 6.7 per cent when compared with the shipments total from same quarter of a year ago. For the year-to-date, the value of primary plastics equipment shipments is up 3.9 per cent over last year. 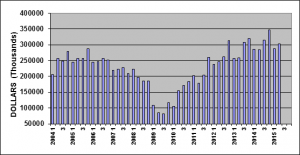 The CES also compiles data on the auxiliary equipment segment (robotics, temperature control, materials handling, etc.) of the plastics machinery industry. New bookings of auxiliary equipment for reporting companies totaled US$121.4 million dollars in Q2. This was a jump of 12.4 per cent when compared with the total from Q2 of last year.

The growth in the CES data on plastics machinery shipments was moderately slower than the year-over-year increase of 5.5 per cent (seasonally-adjusted, annualized rate) in total business investment in industrial equipment (plastics machinery is a subset of this data) compiled and reported by the Bureau of Economic Analysis as part of their quarterly GDP data release.

The Q2 gain in the CES shipments data was moderately stronger than the other major industrial machinery market indicator, compiled and reported monthly by the Census Bureau, which showed that the total value of shipments of industrial machinery increased by 2.4 per cent in Q2 when compared with the year before (plastics machinery shipments are also a subset of this data).

“Despite the volatility in the stock market in recent weeks, the underlying fundamentals indicate that the recovery in the economy is still intact,” Wood said. “The plastics industry has been a growth leader for the US manufacturing sector throughout the recovery, and this will continue through the foreseeable future. Consumer confidence is rising, residential construction activity is accelerating, and stronger economic growth is expected for the rest of the year. Overall, we are reaping the benefits of low interest rates, low energy prices, and rising household incomes resulting from stronger employment levels. This is more than enough to offset the drag caused by weakness in the oil patch, a stronger dollar, and slower export demand.”

The CES also conducts a quarterly survey of plastics machinery suppliers that asks about present market conditions and expectations for the future. The responses from the Q2 survey indicate that machinery suppliers remain optimistic about the market demand for their products in the coming months. Both in the coming quarter and during the next twelve months, 88 percent of the respondents expect conditions to either improve or hold steady. Quoting activity was higher in the second quarter for half of the survey participants.

North America and Mexico are the global regions where the most promising market conditions for machinery suppliers are expected in the coming year. Expectations for Latin America are for mostly steady market conditions, while the outlook for Europe and Asia are steady-to-weaker. 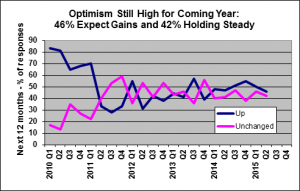