Following on the heels of its recent creation of a daughter company in Canada, France-based robots and automation maker Sepro Group has opened a new European sales and service office.

“We owe a big part of our success in recent years to increased globalization,” said Sepro CEO Jean-Michel Renaudeau. “As we have expanded around the world, however, we have learned how important it is to be local in the regions we serve. Several of our key customers have operations in Austria and Hungary and these countries have a growing automotive sector that needs robots. Our aim is to offer local sales and service support and to be closer to our customers so we can offer them more robot choices.” 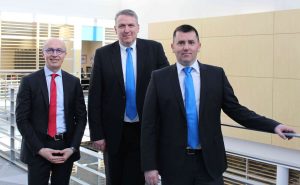 Sepro sales and service will be sharing premises in Budapest with Sumitomo Demag, a partner that sells Sepro robots under the Sumitomo Demag name.

Csaba Jozan, who has 16 years of plastics industry experience, including 7 years representing Sepro in the region, has been named sales manager, Austria Hungary.

The announcement of the new European sales and service office was made soon after Sepro closed the books on its third record sales year in a row. Turnover of 92.8 million euros in 2015 represented a 17 per cent increase over 2014.