The new 3,000-square-meter production and assembly hall for flat dies at the company's headquarters in Troisdorf, Germany is scheduled to open in spring 2020. 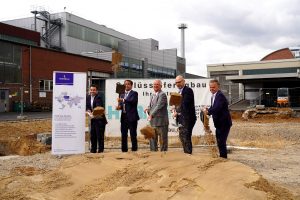 Extrusion machinery maker Reifenhäuser Group has started construction on a new 3,000-square-meter production and assembly hall at its headquarters in Troisdorf, Germany.

Scheduled for completion by spring 2020, the Troisdorf-based family-owned company is investing almost 7 million euros in the new building, which will house its newly founded Reifenhäuser Extrusion Systems (RES) business unit, which supplies components for what the company calls “demanding” extrusion applications.

“From 2020, we will be producing 300 flat dies for plastic extrusion in the new production hall every year,” Uwe Gaedike, managing director of Reifenhäuser Extrusion Systems, said in a statement.

The statement also said that Reifenhäuser will invest an additional 10 million euros over the next five years on production machines and intelligent processes, to create conditions for Industry 4.0-capable manufacturing.

In total, the statement said, Reifenhäuser is planning to invest between 40 to 45 million euros for growth measures at its German sites and at its North American headquarters in Wichita, Kansas.