The facility in Stockton nearly quadruples the company’s available warehouse space in the region. 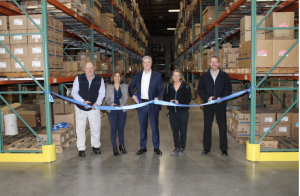 Called “Stockton Distribution Centre” in the Central Valley of California, the new facility nearly quadruples the company’s available warehouse space in the region, and a yard was also constructed for the storage of pipe.

“We listened to our customers and identified an opportunity to grow our presence on the West coast, by building this facility,” Travis Lutes, the Ipex Group of Companies president and COO, said in a statement.

The Ipex Group of Companies is part of Aliaxis, a Belgium-based supplier of advanced plastic piping systems for building, infrastructure, industrial, and agriculture applications.