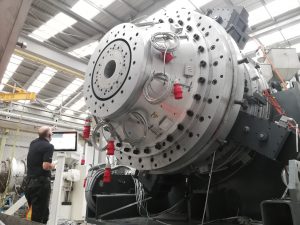 Extrusion machinery maker battenfeld-cincinnati has supplied a large-diameter pipe extrusion line – which comes with what the company is calling the largest melt gap ever produced – to HDPE pipe specialist Policonductos SA de CV, based in San Luis Potosí, Mexico.

The melt gap enables Policonductos to extrude pipes measuring up to 1,600 mm in diameter, and in a range of other diameters without conversion.

The recently delivered line belongs to the series of fast dimension change (FDC) systems, which battenfeld-cincinnati has been marketing since the K2019 trade show in Germany. “Up to now, FDC lines were available for pipes with diameters ranging from 160 to 250 mm, 200 to 355 mm, and 400 to 630 mm,” officials with Germany-based battenfeld-cincinnati said in a news release. “With the new pipe die, the first step has now been taken towards a completely new dimension for pipes up to 1,600 mm in diameter.”

An adjustable melt gap makes particularly good sense wherever the pipe manufacturer desires to produce varying pipe dimensions on its line and to respond fast and flexibly to market trends, battenfeld-cincinnati said. “More or less at the push of a button the pipe die switches over to a new pipe dimension.” A major advantage here is safe handling, the company continued, especially for large pipes like those produced by Policonductos – a die change would be necessary on a conventional line, which would not only cost an enormous amount of time, but would also be a safety hazard due to the large size. Both these drawbacks are now completely eliminated.

“We are absolutely enthusiastic about the range of options offered by this new line,” said Homero Garza, general manager at Policonductos. “We have not only been able to expand our product range to include large-diameter pipes, but we can now also produce pipe dimensions to individual customers’ specifications without any problems.”