Because there's no room for error in critical care applications. 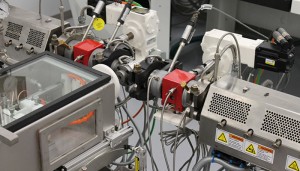 Close might be good enough when tossing a hand grenade, but it won’t cut it in critical applications like medical tubing. Which is why medical extruders can’t afford to overlook even the smallest process flaw.

And there’s a host of problems that can impact tolerances and generate scrap in medical tubing. Chief among them are melt fracture, pressure control, gels and a variety of downstream considerations. We asked some equipment suppliers about the causes and cures for these four product killers.

MELT FRACTURE
A common issue when small tooling gaps are used with polymers such as HDPE, LLDPE, PC, and fluoropolymers, melt fracture is surface roughness. “Melt fracture is caused by a disruption of uniform flow along the metal surfaces when high shear is present,” said Mike Puhalla, general manager, global extrusion with Milacron LLC. “Typically, melt fracture occurs in the final tooling gaps and is a result of the shear rate on the polymer, which is a function of the tooling gap, melt viscosity and output rate.”

One logical approach to avoiding the problem is to utilize larger tooling gaps, which means making the tubing with a larger drawdown. “This is done commonly with fluoropolymers, where melt fracture is quite evident,” said Bill Kramer, president of American Kuhne. “Tooling drawdowns of 2:1 or 4:1 are common for many polymers, whereas fluoropolymers have used drawdowns of 50:1 and larger,” added Kevin Slusarz, American Kuhne’s vice president of processing technology. The challenge, though, is that larger drawdown leads to more orientation in the tube, which can affect its physical properties. “Tooling land length doesn’t offer much assistance in reducing melt fracture,” Slusarz continued.

Since melt fracture is pretty much all about shear stress, reducing that stress — particularly along the die wall — is crucial. “The easiest place to start is with the extrudate melt temperature,” said John Christiano, director of technology, global, with Davis-Standard LLC. “Since the polymer viscosity is a function of temperature, increasing the temperature of the extrudate will lead to a decrease in viscosity, causing a reduction in the shear stress at the die wall. If the shear stress is reduced below the critical level, the melt fracture will be eliminated.”

Another way to reduce the shear stress at the polymer die wall interface is to increase the temperature of the die, Christiano added. “But this intervention will only work when the melt fracture is very slight,” he said.
An obvious way to minimize melt fracture is to slow down, but this isn’t a popular choice among processors. “Reducing the throughput until the shear stress at the die wall falls below the critical shear stress region will eliminate the melt fracture, but at an operating condition that is not economically feasible,” Christiano said.
Changing the resin formulation is another option. Some processes, like blown film, use special fluoropolymer additive masterbatches when extruding PE through small die gaps. “The additive coats the metal surfaces and reduces or eliminates melt fracture,” said Kevin Slusarz. “Medical tubing processors are often limited by federal regulations in the kinds of additives they can use, however.”

PRESSURE CONTROL
Pumping consistency from the extruder is a key to holding good tubing tolerances. But it’s not always easy, especially in extruders of 25-mm diameter or smaller. “Getting the polymer to feed well early in the extruder, and having a screw design that controls the melting process, leads to good pumping stability at the end of the extruder and a good chance of small dimensional variation in the tubing,” said Mike Puhalla. “But even when the best attempts are made to control feeding and melting, some pressure variation is often seen on smaller extruders.”

Gear pumps have been used for years to improve the flow stability of tubing extrusion systems. “The gear pump is a positive displacement pump that ensures that a consistent flow rate of material is delivered to the die as long as the inlet to the melt pump is maintained in a reasonable range,” said Dave Czarnik, R&D lab manager, downstream extrusion with Conair. “In some cases, a gear pump can be used to mask the poor performance of a bad screw design.”

Indeed, a gear pump might just be part of the ideal solution. “A gear pump combined with an optimum screw design is the best option to produce the highest quality tubing,” said John Christiano.
A second option is to use a pressure control setup that allows rapid control of screw speed to reduce variation measured in the die adapter. “A control system that can graph the pressure readings is a good tool for analyzing extrusion stability in a tubing system,” said Bill Kramer.

GELS
Gels, or bumps, on the tubing surface probably date back to the very first extruded tube. “Gels have a variety of causes, including material inconsistencies, degradation, crosslinked particles and contamination,” said Dave Czarnik. “Their size depends on the source; the thinner the tubing wall, the more obvious the gels typically become.”

And it doesn’t help that many popular polymers are “gel-prone”, including flexible PVC, TPU, and some other TPEs. Gels in flexible PVC are typically the result of PVC resin particles that have not absorbed enough plasticizer; thermoplastic urethanes, meanwhile, can have issues with durometer differences throughout the extrudate, especially where the material has been made from different durometer stocks.
Gels should be investigated to try to discover their source and how they can be minimized. “Attempting to melt them can sometimes be done on a heated, temperature-controlled surface; if they don’t melt at all, you know you have a severe problem,” said Bill Kramer. “Another clue is whether the gels are a different color from the main material, suggesting degradation or contamination.”

To get rid of gels, our equipment suppliers say, first try a high-shear screw with elevated barrel temperature settings to see if the gel level can be reduced by shear and temperature. If the gels aren’t reduced noticeably, it’s safe to assume the screw won’t solve the problem. “The options then are to either find a way to filter out the gels with a fine-mesh and large-area filter, or have the gels removed prior to extrusion,” Kramer said. “If it’s impossible to get rid of gels entirely, filtering is the best option, particularly by using either a large-area filter or a candle filter for polymers that are gel-prone.”

DOWNSTREAM ISSUES
Cutting and feeding medical tubing is a lot like trying to push forward a very small, wet noodle, so everything in the process has to run smoothly. If you’re not careful, downstream problems start early. “The puller itself has to have to have a very stable drive system so there’s no speed variation,” Kramer said. “It’s also important that there are no spots in the cooling tank where the tubing can drag and become deformed. Control of the water coming out of the front of the tank also has to be consistent, as too much water surging out can cause the tube to bounce, creating variations in diameter.”

Many medical tubes are both small and low in durometer, making them difficult to feed to the cutting blade. PTFE inserts can help to reduce drag in the bushings, but may require an FDA-approved lubricant — such as alcohol or distilled water — either dripped or sprayed on the tube as it enters the bushing to further decrease drag.

Also, air-feed upstream bushings are becoming common; these create a vacuum that draws the tube into the bushings. “In most cases, even with air-feed bushings, lubrication is still required to enhance feeding and keep the blade wet for optimized cut quality,” Mike Puhalla said.

Sharp edges should be maintained on the cutting surfaces of both the upstream and downstream bushings, Puhalla continued, with the downstream cutter-bushing bore typically larger than the upstream bore by a fraction to offset any potential misalignment.

“Cutting blade choice is also very important,” said Dave Czarnik. “Blades too thick for the particular cutting application can leave burrs on the cut tubes. And it’s important that blades be held in close proximity to the actual cut site for optimum blade support while using the thinnest blade possible.”

So take these keys to consistent tubing to heart, and always consult your equipment supplier with any questions. That hand grenade we mentioned at the outset explodes at a safe distance; errors in medical tubing can blow up in your face.