NPE2018 kicks off in Orlando 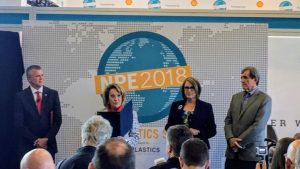 Bill Carteaux (left) and other NPE organizers open NPE2018 on May 7.

NPE – North America’s biggest plastics trade show – has kicked off in Orlando, Fla., and the 2018 edition is the largest yet in terms of exhibit space.

At a press breakfast held on May 7 to help open the show, Bill Carteaux, president and CEO of the Plastics Industry Association, noted that, with 1.2 million square feet of exhibit space, this is the largest NPE ever.

Carteaux also noted that more than 2,100 exhibiting companies will showcase innovations in plastics in the exhibit space on the Orange County Convention Center in Orlando. An estimated record crowd of 65,000 people – including more than 11,000 international attendees representing the plastics industry from 110 countries – are expected to attend the show, which runs from May 7-11.

The ranks of the attendees include more than 760 people from formal buying delegations from 27 countries organized by the U.S. Department of Commerce international buyers program, Carteaux continued. He also said that there are 18 international pavilions representing 13 countries at NPE2018.

This is the third NPE event held in Orlando after decades of the show being held in Chicago. Last week, the Plastics Industry Association announced that the next three editions of the triennial show – to be held in 2021, 2024, and 2027 – will also be held at the Orange County Convention Center.