The sales figures are compiled by the Plastics Industry Association's Committee on Equipment Statistics.

Plastics machinery shipments in North America continued to increase in the third quarter of 2018, according to figures compiled by the Plastics Industry Association’s Committee on Equipment Statistics.

The preliminary estimate of shipments of primary plastics equipment (injection molding and extrusion) for reporting companies totalled US$349.4 million in the third quarter – this was a 4.1 per cent increase from the US$335.5 million (revised) second-quarter shipment. Injection molding shipments in the second quarter were higher than previously thought, the Committee said, and grew by 5.6 per cent year over year. 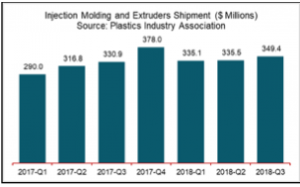 “Plastics machinery shipments recovered in the third quarter following a weak second quarter,” said Perc Pineda, the Plastics Industry Association’s chief economist. “We expect higher shipments in the fourth quarter. We have a tight labour market and U.S. manufacturers, including plastics machinery manufacturers, have been working on production backlogs. As a result, shipments are pushed into the next quarters.”

“Except for soft auto and home sales numbers in the third quarter, the U.S. economy is still in expansionary mode, and that’s good news for plastics machinery manufacturing,” Pineda said. “While there are projections of moderate growth next year, it is expected that the U.S. economy will remain healthy.”