After nine years at the helm of the Westlake, Ohio-based company, Hilton will retire by the end of 2019. 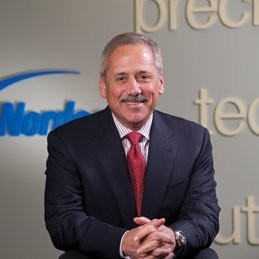 After nine years at the helm, Nordson Corp. president and CEO Michael F. Hilton has announced his plan to retire by the end of 2019.

In a statement, the Westlake, Ohio-based maker of precision dispensing equipment for consumer and industrial adhesives, sealants and coatings announced that it has “initiated a search of internal and external candidates for [a] successor,” and that Hilton will remain in his current roles throughout that process “to ensure a smooth transition.”

During Hilton’s tenure, Nordson grew from US$819 million to US$2.3 billion in sales, the statement said, and he led over 30 transactions at Nordson, including acquisitions that established new product platforms in medical, test and inspection, and flexible packaging.

“[Michael] has done a tremendous job of diversifying and growing the company through both innovation and acquisition, which has driven the company to record sales and profitability,” Michael Merriman, chairman of the Nordson board, said in the statement. “As we look forward, the board intends to identify a leader who will build upon Nordson’s great foundation and further enhance value and opportunities for our employees, customers and shareholders.”

Founded in 1954, Nordson has operations and support offices in more than 35 countries.