Arburg is also constructing a new building for the subsidiary in the Greater Paris area. 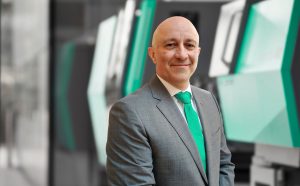 Germany-based injection molding machine maker Arburg has named Pascal Laborde as managing director of its French subsidiary Arburg SAS, and is also constructing a new building for the subsidiary in Paris.

“Laborde has the ideal credentials for his role as managing director,” Arburg officials said in a Feb. 23 statement. “He completed a degree specializing in sales and marketing in France and also has many years of experience in the fields of machine construction and automation solutions.” Most recently, he was a member of the management team for a medium-sized French engineering company, Arburg said. “He has an in-depth understanding of both French and international B2B business as well as the machine construction industry in France,” Arburg said. “Over the course of his career, he has also had some contact with the plastics industry, meaning that he is already acquainted with a number of customers.”

Laborde has been in charge of the French subsidiary since November 2020, Arburg said.

Arburg officials noted that the company has always had “very close links” with the French market, and Arburg SAS was the company’s first-ever foreign subsidiary to be set up, back in 1985.

Arburg is also constructing a new building for the subsidiary in the Greater Paris area. Spanning approximately 1,600 square metres, the new building will have around 25 per cent more space at its disposal, Arburg said, including a large showroom and training facilities.