Strong injection machine orders across Europe make it necessary for Milacron to keep its Malterdingen, Germany operations open longer than anticipated. The plant was originally scheduled to close by the end of 2017.

Due to what it calls “increasing customer demand”, Milacron Holdings Corp. is postponing plans to transfer injection molding machine assembly and machining from its Malterdingen, Germany facility to its new facilities in the Czech Republic.

In March 2016, Cincinnati, Ohio-based Milacron announced that it was transferring injection molding machine assembly and machining from Malterdingen to their new state of the art facilities in the Czech Republic by the end of 2017.

Milacron now anticipates production will continue at the Malterdingen facility until the end of 2019, a full two years longer due to increased customer order intake across all of Europe. For a period of time, the resources of both facilities will be utilized, Milacron said. 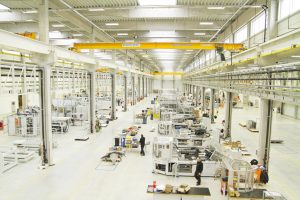 Milacron credits the need to remain operational in Malterdingen to a full European order book to Q1 2018. Milacron has reached an agreement with the Workers Council to amend agreements and in some cases will be bringing staff back that had been previously let go.

“Milacron will still have a strong presence in Malterdingen even after the manufacturing operations transition to the Czech Republic,” said Denis Poelman, Milacron’s managing director, Injection Europe. “Milacron is committed to remain in the Malterdingen area and if there were to be a move it would be within 25 kilometers of our current location. Milacron’s European injection molding machinery business will retain and grow the engineering, R&D, service, sales, marketing, and aftermarket departments.”