Auxiliary equipment maker Maguire Products Inc. is on course to ship the 50,000th Maguire gravimetric blender at some point within the next few months, and is using the occasion to kick off a year-long celebration.

“The Maguire blender is the world’s most widely used gravimetric blender, employed in every type of molding, extrusion, and compounding process and in markets ranging from automotive to wire and cable,” said Hubert Nerlich, managing director of Maguire Products Asia Pte Ltd. “When Maguire president and chief designer Steve Maguire developed the first gravimetric batch blender in 1989, he revolutionized the way raw materials are metered into the plastics processing machine.”

Founded in 1977, Maguire Products is headquartered in Aston, Pa., and operates six manufacturing facilities in the Aston area. The company’s Canadian affiliate, Maguire Canada, is located in Concord, Ont. 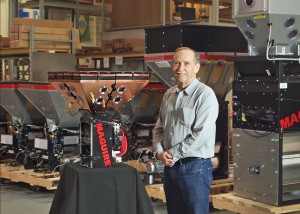