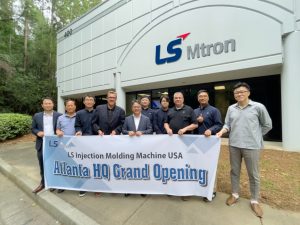 LS Mtron Injection Molding Machines has recently expanded its U.S. operations with the opening of two new facilities: a new large tonnage mold testing and tech centre in Brownsville, Tex., and a parts and service center in San Diego. The company has also announced it has moved to a new headquarters in Duluth, Ga.

LS Mtron also has a Midwest technical centre in Wood Dale, Ill., and a sales and service centre in Queretaro, Mexico.

Gardner said that LS Mtron shipped 284 molding machines to North America in 2021, and is seeing increased demand for its machines, especially large-tonnage models. “These expansions will help us stock more parts and we are increasing our molding machine inventory,” he said. “We have over 40 machines in stock now in the U.S., including models up to 1,400 US tons.”

The new tech centre in Brownsville is co-located with long-time LS Mtron customer MVP Plastics; and the new San Diego parts and service centre has been opened to support the molding operations of many of LS Mtron’s nearby customers along the U.S.-Mexico border – these include Samsung Electronics, which is molding large panel television components, and numerous other molders. LS Mtron has also added an additional two service engineers are working from the San Diego location.