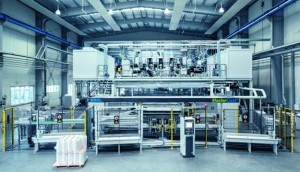 The company, which celebrates its 20th anniversary this year, claims that the new MasterCast line achieves higher film production capacity than any other stretch film line on the market, offering 6 m of usable film width and 4,500 kg/hr output. Because of its width dimensions, the line can produce thin stretch film as well as thick, pallet-wrap film.

The line incorporates six extruders and a 7-m-wide die and chill unit. Thickness measurement is performed via a twin-head, infrared gauge, and the system comes with a triple-turret W4000-25 winder producing rolls weighing up to 60 kg each (132 lb).

Headquartered in the Austrian town of Lenzing, SML is a global supplier of cast film and sheet lines, extruders, coating and laminating systems, spinning lines and related equipment.