After two years of construction, the plastics machinery maker has received the keys for its new site in Laatzen near Hanover from project developer VGP. 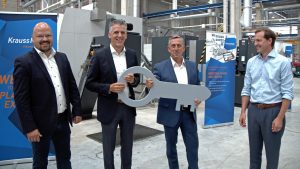 Capping a two-year construction process, plastics machinery maker has received the keys for its new production site in Laatzen near Hanover, Germany, from project developer VGP.

Covering an area of around 97,000 square meters, the new plant offers space for up to 750 workplaces for the production of extrusion systems and recycling equipment for the plastics and rubber processing industries.

Relocation from KraussMaffei’s plant in Hanover started in July and is expected to be completed by December, KraussMaffei officials said in a Sept. 1 statement, with production being continued during the entire relocation period.

The smart factory in Laatzen will be equipped with consistently networked production, data processing in real time, process visualization, and data evaluation. “In the new Laatzen plant, all extrusion technologies – from pipe and profile extrusion through sheet and flat film extrusion to rubber and foam extrusion – as well as compounding and recycling technologies are combined at a single location,” said Dieter Thewes, CEO of KraussMaffei Extrusion GmbH.

In addition to the new office and production buildings, KraussMaffei has established a customer experience centre for customers and visitors, which is available for technical trials performed within the frame of customer-specific projects. “Demanding and complex extrusion applications can be tested here on up to 26 lines under realistic production conditions,” the company said.

The move from Hanover to Krauss-Maffei-Straße in Laatzen is part of the new location strategy of the Munich-based company, which involves the relocation of four sites to larger and more modern production facilities. The new plants in JiaXing (near Shanghai) and in Einbeck (near Göttingen) have already been in operation since 2020. In Einbeck, KraussMaffei’s subsidiary Burgsmüller produces important core components for extruders. Also this year, KraussMaffei will move into the new headquarters in Parsdorf, east of Munich.