“Our new TechCenter allows us to offer our customers individual development and sampling possibility in the field of reaction process machinery, through to prototype series production, including our latest generation of KraussMaffei mixing and metering systems and mold carriers,” said Klaus Jell, general manager of the KraussMaffei subsidiary in Mexico. “The new mold carrier is used primarily for the production of steering wheels.” 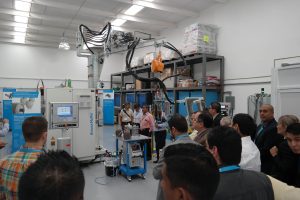 In addition to live demonstrations of KraussMaffei’s new RimStar Compact 40/16 mixing and metering system, attendees at the TechCenter opening were offered specialist lectures and presentations on issues such as lightweight construction with fibre-reinforced plastics, and applications in the interior of an automobile. “It was a highly successful opening ceremony that sent out an important signal for the strong position of the KraussMaffei Reaction Process Machinery in Mexico,” Jell said.

Munich, Germany-based KraussMaffei has had a presence in Mexico since 1999.