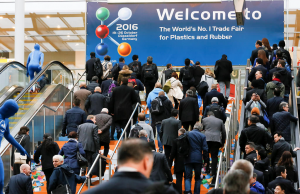 The eight-day event runs from Oct. 19 to Oct. 26 at the Messe Düsseldorf trade fair ground, and as of the quarter-way point attendance is significantly above the last K trade fair in 2013. According to trade show officials, approximately 26,000 attendees visited the show on the first day, compared to about 23,000 on the first day of the show in 2013. On the second day, Oct. 20, attendance swelled to almost 45,000, compared to 41,000 on the second day of the show in 2013.

K 2016 features approximately 3,285 exhibitors from throughout the world. With a net display area of 173,966 square metres, all 19 halls at the Düsseldorf trade fair venue are completely booked out.