The hot runner supplier's new building will have a combined office and manufacturing floorspace of 63,400 square feet.

Hot runner manufacturer Incoe Corp. has purchased and is renovating a 63,400-square-foot building in Shanghai, China that will become its new Asia headquarters.

The new building, located only about one km from the company’s current facility in Shanghai, will have a combined office and manufacturing floorspace of 63,400 square feet. In a statement, Auburn Hills, Mich.-based Incoe said the new plant will have three floors of office space and a 42 per cent larger manufacturing area for greater hot runner system manufacturing capacity. 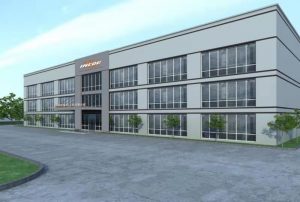 A rendering of the future Asia headquarters for Incoe in Shanghai, China.

The investment in Shanghai follows a previous expansion in 2013 when an adjacent and identically sized workshop was acquired, doubling the available workspace. The two existing facilities will consolidate together into the larger new headquarters building by the end of November 2019, Incoe said.

“Our continued growth in the Asia market made it necessary that we secure additional manufacturing floorspace,” Ho Chee Kiang, Incoe’s general manager of Asia operations, said in the statement. “The new factory will allow us to expand production as needed.”

The new Shanghai plant is Incoe’s latest move to expand internationally. The company opened a new European headquarters facility in Germany in 2014, a new technical service centre in Mexico in 2018, and the new global headquarters in Auburn Hills in 2018.