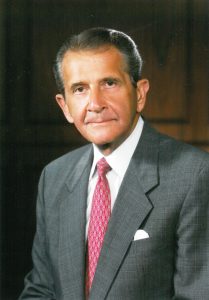 Stanley Gault, chairman of the board and CEO of consumer goods manufacturer Rubbermaid from 1981 to 1991, died on June 29 in Cleveland, Ohio, at age 90.

Born in Wooster, Ohio, Gault graduated from The College of Wooster in 1948 with a major in geology. His college years included service in the United States Army Air Corps during World War II, where he was a tail gunner on a B-29 Superfortress in the Pacific Theatre.

After college, Gault spent 31 years with General Electric before joining Rubbermaid, which had been co-founded by Gault’s father. Best known until that time for producing food storage containers, trash cans and sink mats, under the younger Gault’s guidance the company invested in new product development and introduced hundreds of products that diversified its brand, including sheds, step stools, closets and shelving, laundry baskets, and other household items. He also led a number of significant acquisitions, including Little Tikes, the manufacturer of popular children’s toys.

Gault was credited with more than quadrupling Rubbermaid’s annual sales.

Gault left Rubbermaid in 1991 and within a few months had been tapped to lead another large Ohio manufacturer, the Goodyear Tire and Rubber Company of Akron, which was struggling with slumping sales and a huge debt at the time. He served as chairman and chief executive from 1991 to 1996. Gault paid down the company’s debt and increased revenue by selling tires through Sears stores rather than relying on Goodyear’s retail outlets. Over time, he reduced costs by eliminating about 10,000 jobs.

Gault’s service in the U.S. national arena included an appointment by President Nixon to the National Business Council of Consumer Affairs, where he served as vice chairman of product safety. He was later appointed by President Reagan and President George H.W. Bush to the Advisory Committee for Trade Policy and Negotiations, serving as chairman of the special task force on industrial subsidies.