Husband and wife team Georg and Irene Schwarz, who were both instrumental in building and leading the Engel Group injection molding machinery brand, have both passed away within only a few days of each other in late March and early April at ages 88 and 86. 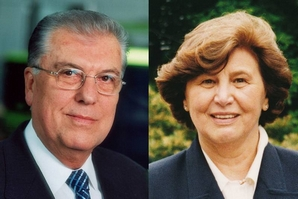 “For Engel, the deaths of Irene and Georg Schwarz mark the end of an era,” said Schwertberg, Austria-based Engel in a news release. “For decades, they jointly managed the business; both followed the development of the company with great interest until the end. They leave behind a void that cannot be filled.”

Born in 1929 in Serbia, Irene Engel came with her family to Austria in 1944, where one year later her father Ludwig Engel founded a machinery construction company called Engel in Schwertberg. She worked in the company from the very beginning in roles as diverse as bookkeeper, financial director, controller and director of human resources. In 1951, she married Georg Schwarz, who also joined the staff at his father-in-law’s company. Georg Schwarz was born in 1928 in Croatia, and moved with his family to Upper Austria in 1945, where he attended a technical school for mechanical engineering.

After the sudden death of Ludwig Engel in 1965, Irene and Georg Schwarz took over the management of the company that had 380 employees at the time. “With entrepreneurial courage and a special intuition concerning industry trends and growing markets, they guided the company onto a path of growth that continues today,” the Engel news release said. “Early on they decided to establish foreign subsidiaries, opened two production plants in North America and already set the course for the system solutions business in the 1980s with the development and production of the company’s own robots.” 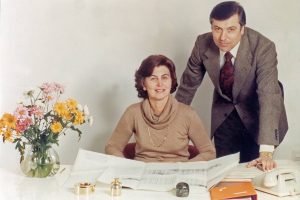 In 1997, they turned over the operational management of Engel to the third generation when Peter Neumann, husband of Georg and Irene’s daughter Helga, became CEO. But both remained actively involved in the business. “At the start of the new millennium, Irene and Georg oversaw the step into Asia with the founding of the production plants in Korea and China, and when flooding destroyed the production facilities at the headquarters in Schwertberg in 2002, they also joined in actively tackling the task of rebuilding,” the statement said.