Engel is forecasting a six per cent increase in earnings over last year, with Germany representing the "lion's share" of the sales.

These gains come despite problems relating to ongoing trade disputes in North America that have slowed the company’s sales in that region for the first time in several fiscal years. 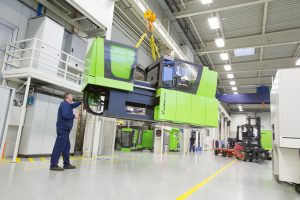 On the shop floor at Engel’s HQ in Schwertberg, Austria.

In a press release timed to coincide with the Fakuma plastics trade show in Germany, Engel said that it’s expecting to close out the fiscal year 2018/2019 with a group turnover of around 1.6 billion euros, compared to a turnover of 1.51 billion euros in the 2017/2018 fiscal year.

“Europe represents the lion’s share [of our sales] with 53 per cent, while America currently amounts to 24 per cent and Asia to 22 per cent,” the statement said. “The revenue growth in Asia is by far the biggest in the Engel Group…and Asia is continuing to develop very dynamically.”

Germany remains the market with the highest turnover, Engel said, and continues to be the company’s “key engine of innovation.” “[We] have managed to increase our sales in Germany by 50 per cent over the past five years,” the company said. “Two factors in particular are contributing to this. Firstly, the global expansion of many companies based in Germany and secondly, the high level of technological development with heavily demanding projects.”

In addition to posting its turnover numbers, Engel also said that it is “larger than ever before in its history” in terms of its employee count. “By the end of the current fiscal year, [we] will be employing 6,800 people around the globe, around half of which will be in Austria,” the company said.