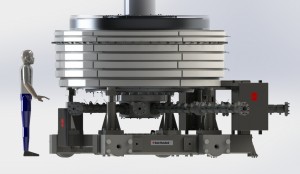 Graphic of the new die package, to scale.

“[The new line]will support the production of high barrier and non-barrier film structures ranging in thickness from 30 to 200 microns,” said Mikael Ahlback, Rani Plast’s managing director. “The die design uses concepts that will allow us to optimize the amount of high cost EVOH resin used in our barrier film formulation.”