Custom molder grows by 800 per cent in 6 years

A U.S.-based custom injection molder is crediting liquid silicone molding for a large part of its major growth over the past six years.

MDS Manufacturing LLC, in St. Louis, Mo., has grown by a whopping 800 per cent since it was founded in March 2010 by brothers Dave and Mike Skagg – from three thermoplastic injection molding machines and three employees when they opened for business, to today’s eighteen machines and thirty employees.

A large part of that growth has been their LSR molding capability, which was initiated in 2013 and has grown to the seven machines running today – over one third of the company’s capacity. The company’s newest machine, an Engel victory 200/100 hy-tech unit with eco-drive, was delivered just recently. The other six injection molding machines are also made by Engel. 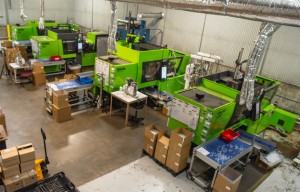 The company, primarily molding for the infant care business with parts for baby bottles and breast pumps, was able to add complimentary products such as baby nipples and pacifiers, as well as silicone over-molded plates, forks and spoons which were typically molded in China. MDS was able to cut delivery time for their infant care client from the six months being experienced with their Chinese supplier to a six-week turnaround.

The company operates from a 27,500-square-foot facility in St. Louis, and produces over 30 million parts annually, running shifts 24/7 to keep up with production. As well as their LSR molding capabilities, the company also has eight thermoplastic injection molding machines and three injection stretch blow bottle machines.

And the company’s profits have grown from US$1 million in sales in their inaugural year to US$8 million in their last fiscal.

Next up: a substantial expansion of their facilities for 2017, as well as the hunt for an additional 60,000 – 90,000-square-foot facility. “The new facility will allow us to bring in a wider range of infant care products, additional products for the medical industry, and will allow the manufacturing of products being designed by MDS,” said Mike Skagg.