Company also marks 25 years of direct selling in the U.S. 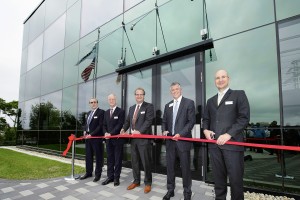 Cutting the ribbon at the opening, with managing partner Michael Hehl (third from left) and Bill Carteaux (fourth from left).

The 27,000-square-foot building is located in Rocky Hill, Conn., just a few miles from the company’s longtime U.S. base in Newington, Conn.

The centrepiece of the new building is the showroom, which Arburg says has sufficient space for seven Allrounder injection molding machines that can be used for testing and training purposes. “There is also plenty of space for setting up and dismantling complete turnkey systems, which are experiencing rapid growth in demand in the U.S.,” Arburg said. “The building also features a comprehensive spare parts store, a machine store as well as a special area for the Freeformer. This industrial additive manufacturing system has been available in the US since its launch at the NPE trade fair in March 2015.”

About 245 customers and guests attended the opening, including Bill Carteaux, CEO and president of the SPI industry association, who gave a keynote address.

The U.S. is Arburg’s largest export market, and Arburg said that an installed base of 12,000 Arburg injection presses are molding parts in the U.S. and Canada.

The open house also celebrated Arburg’s 25th anniversary of direct selling in the U.S., through its American subsidiary Arburg Inc.

“Our new U.S. headquarters, our infrastructure, and our highly motivated team of experts will enable us to further intensify our collaboration with our customers,” said Arburg managing partner Friedrich Kanz. “We are perfectly positioned to enjoy another 25 successful years in [North America].”