To be opened in the second half of 2020, the facility will be used for building large injection molding machines and turnkey systems. 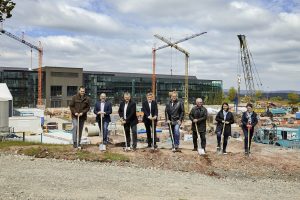 The start of construction on the new Arburg assembly hall was officially marked by the ground-breaking ceremony on May 16.

German machinery maker Arburg GmbH & Co. KG has begun construction on a new assembly plant at its headquarters in the town of Lossburg for the production of its large Allrounder injection molding machines and other turnkey systems.

The new hall will have 28,500 square metres of usable floor space, the company said in a statement, of which 21,900 are available for production and administration. 3,700 square metres are reserved as a technical area and 2,900 are traffic area. The building volume totals 195,000 cubic metres. The ground floor is scheduled to be ready for use in the second half of 2020.

The investment in the new facility amounts to “tens of millions of euros,” Arburg said, and will increase the total space of its central production site in Lossburg by almost 20 per cent to 200,000 square metres by 2020.

Arburg held a groundbreaking ceremony May 16 at the Lossburg site.

“In terms of building activity, we have been in a state of rapid progress since 2007: customer center, assembly hall, parking structure, exhibition logistics hall, training center and now a new assembly hall,” Michael Hehl, Arburg’s managing partner who is also responsible for plant development, said in the statement.