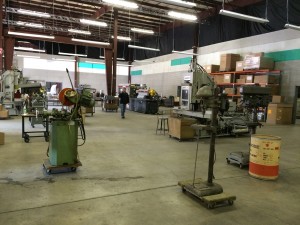 The production set of “Joy”.

For scenes filmed in April 2015 in the Massachusetts area, the “Joy” production crew needed to reproduce an injection molding facility for actor Jennifer Lawrence and turned to Worcester, Mass.-based Absolute Machinery for help.

“To create the movie set, sales manager Steve Murdoch and the Absolute team provided the production staff with everything they needed including transportation and rigging on the set to reproduce a working injection molding manufacturing facility, complete with operating machines, auxiliaries, typical office equipment, shelving, cabinets, and everything else one would see in a molding environment – including two team members from Absolute Machinery,” the company said. “Technician Joe Hopper and technical manager Stuart McCarthy worked on the set as extras for five days to make sure everything ran smoothly.”

“Joy” is loosely based on the story of Joy Mangano, a self-made millionaire in the U.S. who created her own business empire in the early 1990s when she invented and marketed the self-wringing Miracle Mop.