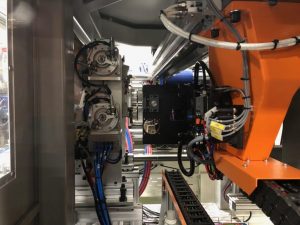 The IML workcell in action.

Injection molding machine maker Absolute Haitian Corp. came to the Expoplast trade show loaded for bear, with a running in-mold labeling (IML) system at its booth so large that it actually backs into a second booth.

“We went all in this year to show an IML system to packaging molders in the Quebec area,” Patrice Aylward, Absolute Haitian’s communications consultant, said. “It wouldn’t fit in our booth #615 so we teamed with Wayne Hart and Phillipe Sisley from Barway Plastic Equipment Inc. to put the clamp end of the machine in their booth #619. In fact, the all-electric Venus II/2300 molding machine barely fit through the dock door at the Palais des congrès.”

The IML automation is available in two configurations: side-entry and top-entry. Side-entry is the high-speed configuration for parts where a label may be placed and part removed within the available daylight and vertical tie-bar spacing, Aylward said. Top entry is generally applicable to larger products where parts must be removed out the top of the mold and traversed over to the stacking unit.

“The machine cell performs in the same league as industry-leading competitors but is available at a 20 to 30 per cent lower cost,” Aylward added.

Founded in 2006, Absolute Haitian is headquartered in Worcester, Mass. as the exclusive sales and service agent for Haitian Plastics Machinery Ltd. in the U.S. and Canada. Headquartered in Vaudreuil-Dorion, Barway Plastic Equipment is the company’s sales representative for Quebec.

The Expoplast trade show runs from Nov. 14-15 at the Palais des congrès de Montréal, and is part of five other co-located manufacturing trade shows.