Richmond Hill, Ont.-based blow molding machine manufacturer W. Amsler Equipment Inc. will play a key role in the making of craft beer that will be sold throughout the week of NPE2018 in Orlando, Fla.

The family-owned company, which supplies all-electric linear PET stretch blow molders, oversaw all design, technical, and manufacturing work for production of 12 ounce long-neck containers which were filled off-site in Orlando, according to Heidi Amsler, marketing manager for Amsler. The beer will be sold in the Beer Garden, which is part of NPE’s Bottle Zone – an area consisting of 40 exhibitors who work in PET packaging. 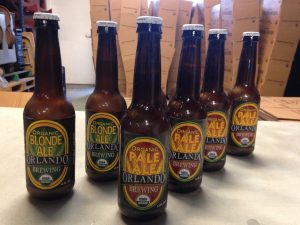 Amsler’s general manager Bruce Coxhead and Heidi Amsler worked with numerous suppliers and vendors including Bill Droste, a partner with Orlando Brewing in Orlando who had a pre-existing arrangement to supply beer in glass containers with the Orange County Convention Center. Droste worked closely with Amsler and among his requirements were a 12 ounce long-neck bottle with a panel diameter similar to glass. Amsler had to maintain the bottle height for filling but shortened the shoulder to compensate for the wall thickness in a glass bottle.

Amsler reached out to its mold partner Mold Spec, headquartered in Stoney Creek, Ont., who utilized their own patented base for the bottle. The bottle design was approved by Orlando Brewing and was reviewed by other brewers in Canada and the U.S. In a collaborative effort, the 12 ounce, 36 gram preform was designed by Amsler with assistance from Athena Automation and Yudo Valuepro. The preform was designed to accept a standard metal crown closure and was optimized for the required axial and diametrical stretch ratios as well as core and cavity draft for preform molding. Preforms were designed by Amsler to run on Athena equipment at its Ontario location.

For the barrier material, Amsler selected a monolayer structure with barrier additive which would allow the molding of PET preforms generally on any injection molding machine equipped for PET. Amsler used its single-cavity PET stretch blow molder to produce bottles for the NPE show. The 12 ounce barrier bottles are amber, with colour from REPI S.p.A. W. Amsler also created barrier clear bottles to target the growing cider market.

Amsler will be exhibiting at NPE at Booth S21067.