Alan Jope, currently the president of Unilever’s beauty and personal care division, has been appointed as successor.

Paul Polman, the CEO of global consumer goods manufacturer Unilever, will retire from the company effective January 1, 2019, to be replaced byAlan Jope, who is currently the president of Unilever’s beauty and personal care division. 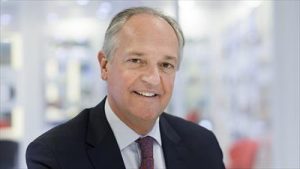 Polman has been Unilever CEO for over 10 years, during which time the company transitioned towards what it calls a “new model of sustainable growth.” Among other initiatives, Unilever announced plans to have all of its plastic packaging fully reusable, recyclable or compostable by 2025.

“Paul is an exceptional business leader who has transformed Unilever, making it one of the best-performing companies in its sector, and one of the most admired businesses in the world,” Unilever chairman Marijn Dekkers said in a statement. “His role in helping to define a new era of responsible capitalism, embodied in the Unilever Sustainable Living Plan, marks him out as one of the most far-sighted business leaders of his generation.”

Jope, 54, has led beauty and personal care, Unilever’s largest division, since 2014, and has been on the company’s Leadership Executive since 2011. He joined the company as a graduate marketing trainee in 1985.

Unilever is one of the world’s largest consumer goods companies. Its Canadian division, Unilever Canada, is headquartered in Toronto.