The Graham Mega 26 dual-parison system produces 46,800 bottles per hour to meet the demands of a leading Chinese packaging supplier.

The production line, a Mega 26 dual-parison system, was commissioned in December 2017 at the Guangzhou facility of a converter for a leading U.S.-based global consumer packaged goods brand.

“For decades we have served the world’s leading converters and CPGs with our flagship Graham rotary extrusion blow molding solutions,” said Graham CEO David Schroeder. “While we have sold rotary wheel systems for converters elsewhere in Asia, this project demonstrates the need for rapid evolution, technological advancement, and automation to combat China’s increasing costs, growing regulation, and desire for high quality products for its domestic packaging market.” 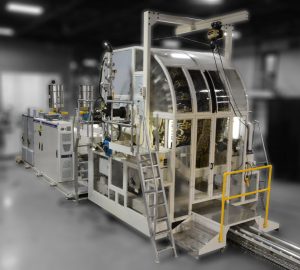 Introduced to the project by the U.S.-headquartered CPG, the Graham team worked with the company to define the project scope, evaluate production alternatives, and build the business case. They ultimately decided to proceed with one of their converters, who committed to a near-site greenfield plant with a fully-automated production line.

The volume justified a 26-station, dual-parison, quad-cavity wheel producing 46,800 bottles per hour, replacing twelve locally-manufactured shuttle machines. “The line’s speed, capacity, and automation facilitates greater efficiencies in production and in downstream bottle handling,” Graham engineering said in a statement. “It also enables the brand owner to move away from a stock package to a new bottle design consistent with its global standard.”