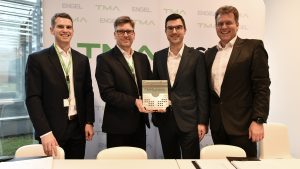 In a move aimed to expand its offerings in process automation, injection molding machine maker Engel Austria has acquired the majority interest in Poland-based TMA Automation.

“Engel has a strong presence in Eastern Europe, and with the acquisition of TMA is taking the next step for further growth in the region,” Engel Group CEO Stefan Engleder said in a news release. TMA’s technologies perfectly complement [our] in-house spectrum of robots and automation components.”

The release also noted that Engel and TMA have already cooperated closely numerous customer projects, with the regional focus being Poland and the neighbouring eastern European countries.

One of TMA’s focuses is on automating in-mold labelling processes in the medium performance segment. “With TMA, we’ve gained a know-how provider who knows the specific requirements of this performance segment very well and optimally serves them with solutions tailored to them,” Engleder said.

In the high-performance segment, Engel said it will continue to cooperate with its long-standing partners for IML automation.

TMA, which is headquartered in Gdynia, Poland, will remain independent under the Engel Group umbrella and continue to be an independent market player in the future. The two company founders, Marek Łangowski and Piotr Orlikowski will continue to manage the company.

Engel also said that the deal helps to allow TMA to push forward with its growth targets. A site has already been purchased in Gdansk in order to start building a new office and production facility in the near future. “As a location, Gdansk, with its good infrastructure and large number of technical universities in the surrounding area, is the ideal starting position for excellent access to a qualified expert workforce,” said managing director Walter Aumayr. “We will also be expanding the workforce at the new Gdansk facility.”