Described as a "world first for the beer industry," the Danish brewer said it would cut the amount of plastic used in its traditional multi-packs by as much as 76 per cent.

Danish brewer Carlsberg says it will cut the amount of plastic used in traditional multi-packs by as much as 76 per cent by using glue to replace the plastic wrapping that holds together its six-packs of cans.

When rolled out, the new “Snap Pack” packaging will reduce plastic waste by over 1,200 tons per year, which is equivalent to 60 million plastic bags, Carlsberg said. 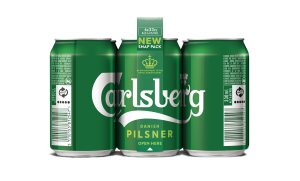 According to Carlsberg, the Snap Pack’s glue is strong enough to keep the cans together during transport and storage, but is easily pulled apart by the consumer when so desired.

“We’re constantly in pursuit of new ways to make probably the best beer in the world even better,” Carlsberg said in a press release. “And not just the way it tastes. To reduce waste, we’re introducing our new snap pack, which uses a revolutionary glue technology.”