Fraser, Mich.-based PCS launched a 2,500-square-foot warehouse in Tecumseh, Ont. with speeches from Windsor-area dignitaries and a green ribbon-cutting ceremony.

The Fraser, Mich.-based firm launched a 2,500-square-foot warehouse at 2050 Halford Rd., with speeches from Windsor-area dignitaries and a green ribbon-cutting ceremony. 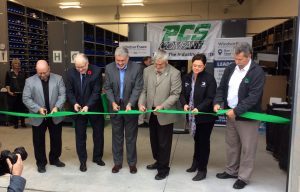 “We are in Windsor because we view this in some ways as the epicentre of the moldmaking market in Canada and to a certain extent in North America, and we think having a presence in the Canadian market is critical to our strategy going forward,” PCS Company president Dave Cataldi said. “In the past, we’ve serviced the Canadian market by crossing the Michigan/Ontario border, but that’s not a practical way to grow our business in Canada.”

The new warehouse represents a US$200,000 investment, Cataldi said, and will create a total of four jobs: two in the warehouse and two in sales, though Cataldi said it’s possible the company will grow in the future. “Hopefully, we can evolve the business and make it a bigger place,” he said. “We can ship parts from here, or customers can come by and pick parts up themselves.” 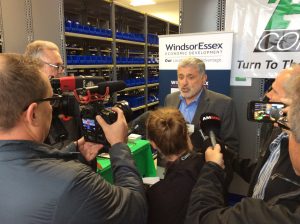 The new site marks a “key part” of the PCS Company’s plans to speed up deliveries, according to director of sales Bruce Konopinski. “We have plenty of room at this warehouse to expand the current product offering,” he said. “We are also very confident that locating in the Windsor-Essex region makes great business sense.”

Though PCS officially opened its doors on Nov. 1, the Tecumseh warehouse started operating a few weeks ago, serving the local plastic injection industry.

“So far we’re seeing a substantial business uptick since we unofficially opened a few weeks ago, and we think there’s a lot more to come,” Cataldi said.