The expansion of the West Boylston, Mass. facility will allow the toolmaker to better serve its customers in the U.S. and Canada. 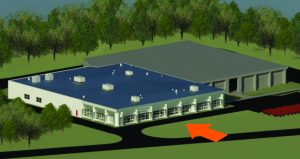 An artist’s rendering with an orange arrow showing the expansion.

In a move designed to better service its American and Canadian customers, Emuge Corp., a manufacturer of taps, drills, end mills and other rotary tools, has recently broken ground to build a 22,000-square-foot expansion project that will double the size of its U.S. headquarters and manufacturing facility in West Boylston, Mass.

The expansion will include more manufacturing space and the addition of a PVD coating centre. In addition, Emuge plans to expand its current Technology and Training Centre, also located at the West Boylston facility.

“The expansion will allow us to better serve our customer base in the U.S. and Canada,” Bob Hellinger, president of Emuge Corp., said in a statement. “The growth we have experienced in our aerospace and power generation customer base has been significant in the past few years. The expanded facility will provide additional capacity to manufacture special solid carbide tooling domestically and allow us to provide customized solutions within our milling portfolio.“

Construction for the expanded facility began in September 2018, with completion slated for the second quarter of 2019. A grand opening celebration for the newly expanded Emuge headquarters and manufacturing facility will be announced in 2019.

Emuge currently has tool reconditioning capabilities in West Boylston for taps, end mills and drills, combined with the ability to manufacture tools such as spot drills, chamfer mills and make other round tool modifications.