Peter Summo is taking over as president effective October 1, 2016. Summo will succeed Arno von der Eltz, who is retiring. 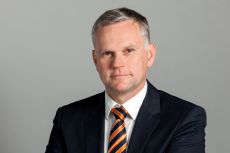