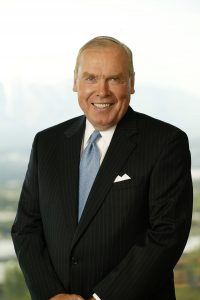 Born in Idaho, Huntsman got his start in the plastics industry in the late 1960s, working for a California-based packaging company partly owned by Dow Chemical Co. After founding Huntsman Container Co. in 1970, he developed the revolutionary polystyrene “clamshell” container used by fast food restaurants like McDonald’s in 1974, and then went on to invent as many as 30 other popular products, including the first plastic plates and bowls.

In 1982, Huntsman formed Huntsman Chemical Co. in Salt Lake City, Utah. The firm expanded through a series of strategic acquisitions – including from Texaco and Imperial Chemical Industries – and now employs 10,000 and has annual sales of approximately US$7 billion, and produces polyurethanes, pigments, advanced materials, performance products, and textile effects. Jon Huntsman received numerous industry awards in his long career, including membership in the Plastics Hall of Fame and a leadership award for lifetime achievement from the American Chemical Society. He was named director and Chairman Emeritus of the company in December 2017; his son Peter Huntsman currently serves as chairman, president, and CEO.

“[Huntsman] was widely regarded as one of his generation’s great industrialists…and leaves behind an extraordinary legacy,” Huntsman Corp. said in a statement.