Midland, Mich.-based Dow Chemical Company has taken a big step forward with its US$20 billion joint venture in the Middle East with Saudi Arabian Oil Co., called Sadara Chemical Co. – the JV has started up its mixed feed cracker (MFC), a manufacturing asset that is able to produce ethylene and propylene.

The Sadara JV between Dow and Saudi Aramco – a Saudi Arabian national petroleum and natural gas company – is made up of 12 furnaces, 7 of which will be used to crack ethane, while the remaining 5 will be used to crack naphtha. Three of the five liquid furnaces will have the ability to switch between gas and liquid feedstock. 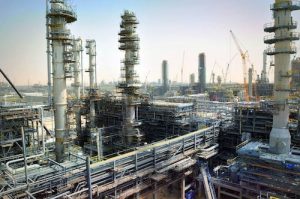 The MFC is one of 26 manufacturing assets being built at the complex in Jubail Industrial City II, which is expected to be fully operational by the end of 2016, and is estimated to deliver annual revenue of about US$10 billion within a few years of operation.

“The startup of the mixed feed cracker is a pivotal next step in realizing the full value creation of this world-scale integrated complex, which builds upon the unique strengths of its parent companies to deliver a portfolio of differentiated, high-value plastics and specialty chemical products throughout emerging economies,” Dow said. “Sadara remains on schedule for a sequenced start-up process, continuing with the polyethylene and polyolefins envelope to maximize timing in the ethylene cycle, followed by ethylene oxide/propylene oxide and their derivatives. The more than 3 million metric tons of performance-focused products will add new value chains to the Kingdom’s petroleum reserves, resulting in the diversification of the economy and region.”