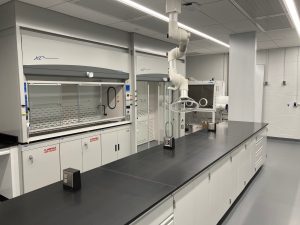 One of Braskem’s new I&T labs

Brazil-based material supplier Braskem has completed a US$10 million expansion of its Innovation and Technology Center in Pittsburgh, Pa.

Srivatsan Iyer, Braskem vice president of strategy, planning and innovation & technology, said the expansion “is designed to house the latest, cutting-edge equipment for research, which will allow Braskem to explore new avenues for growth.”

Building on Braskem’s I’m green bio-based polyethylene (PE), Braskem’s statement continued, Braskem scientists and researchers in Pittsburgh will use the new labs to test new ways to convert a mixed, post-consumer plastics stream back into raw materials that can then be used to produce new plastics that meets the requirements of strictly regulated industries such as automotive, food and healthcare applications.