This latest goal follows on the heels of a similar BASF target, set in 2015, of increasing the proportion of women in leadership roles to 22 to 24 per cent as of 2021, which it achieved at the end of 2019. 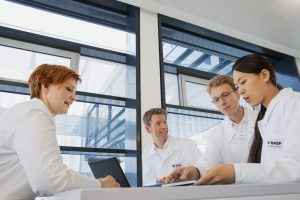 Germany-based chemical maker BASF has set itself a new target for 2030: to increase the proportion of women in leadership positions to 30 per cent worldwide.

This new goal follows on the heels of a similar BASF target, set in 2015, of increasing the proportion of women in leadership roles to 22 to 24 per cent as of 2021, which it achieved ahead of schedule at the end of 2019.

“We want to better incorporate women and their abilities in the leadership team of BASF,” said Dr. Martin Brudermüller, chairman of the board of executive directors of BASF SE. “As a research-driven company, we know the value of diverse ways of thinking and working. Different perspectives result in innovative ideas and solutions for our customers.”

All leaders are obliged to pursue this newest target, BASF said. “Early recognition, nomination, and development of talented female employees as well as long-term succession planning will contribute to reaching the goal,” the company said. “The majority of leadership positions at BASF are filled internally. BASF supports young leaders by offering individualized mentoring and training programs.”

Since 2016, BASF has been a member of the Germany-wide Chefsache initiative. This network of leaders from industry, academia, the public sector, and media aims to initiate social change, such as increasing the percentage of women in leadership positions in Germany.