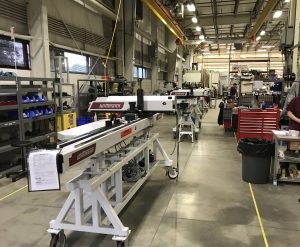 Wittmann Battenfeld Inc., the American division of Austria-based Wittmann Battenfeld GmbH, has set a new company record for monthly robot sales, with more than 80 robots sold in June, and says it’s on track to have a record year in 2021.

“Our robot and automation business in 2021 has just taken off,” Jason Long, Wittmann Battenfeld’s national sales manager, robots and automation, said in a news release. “We’re hearing more and more from our customers that they need to automate.”

“One customer recently told us that the struggle to find workers has prompted them to rethink their business model, and they’re now looking to deploy robots and automation wherever possible,” Sonny Morneault, Wittmann Battenfeld’s vice president of sales, added. “Another told us a recent automation system we provided will perform the labour of 11 workers.”

Besides the increase in demand in the plastics industry for robots and automation, there’s also the issue of global delays in the supply chain for the components and raw materials needed to build these systems, said Morneault.  “We’re excited to see the increased adoption of robotics in our industry, and we’re working hard to keep up with the demand,” he said. “Unfortunately, we are also dealing with significant cost increases and delays in materials. We hope this situation improves soon, but in the meantime our corporate headquarters is doing whatever it can to keep our factories producing equipment.”

Wittmann began selling robots in the U.S in 1986 and since then has built and shipped over 8,000 in that country; and the parent company has built more than 55,000 robots since it began operations in 1976. Wittmann Battenfeld also makes injection molding machines and auxiliary equipment. The company is represented in Canada by Wittmann Battenfeld Canada Inc., which is headquartered in Richmond Hill, Ont.