A new dataset from AMI Consulting shows the challenges facing the European plastics industry in 2022 and through to 2027.

A new dataset from AMI Consulting shows the challenges facing the European plastics industry in 2022 and through to 2027. It covers all of Europe including Russia and former CIS countries.

“GDP forecasts for 2022 still look quite healthy,” officials with UK-based AMI said in a Nov. 30 news release. “The IMF in its October update forecast 2.6% growth for Europe in 2022, a figure that would be higher if Russia and Ukraine were excluded. Advanced Europe is expected to grow 3.2%.” 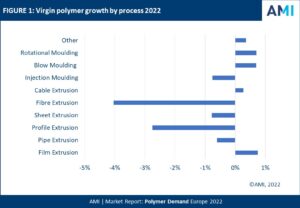 However, the virgin polymer market looks less healthy, with AMI forecasting a 0.4% decline in plastic consumption. “This headline number hides wide differences between polymers, between processes, between countries and between applications,” AMI said.

The weakest process is fibre extrusion, AMI said, with two specific areas of fibres that are particularly weak: hygiene and medical nonwovens, and carpets. “Hygiene nonwovens have been a very strong market – especially in 2020,” AMI said. “Masks, other PPE like draps and gowns and hygiene wipes, all saw very strong demand. Some of these were imported from Asia, but much was made in Europe and demand for spunbond machines was very strong. Now we are using less of this equipment demand is falling off.”

Carpet production in Europe, meanwhile, has been weak for decades, AMI said, but the energy crisis this year has further put up costs. “Cheaper Asian products have taken another leap in share of the home carpet market,” AMI said. “Automotive carpet volumes continue to be impacted by weak production in that market.”

Injection molding is the largest single process for virgin polymers in Europe, AMI said, being in the middle of the growth profile, with a small decline. However, there are strong differences between polymers, countries and applications. “Some of the differences are due to sustainability concerns – for example inter-polymer substitution in packaging, changes in automotive components due to electrification and lightweighting,” AMI said. “Others are due to economic change – for example the continued weakness in the automotive industry continues to bite.”

The strongest – or perhaps “least weak,” AMI said – polymer application is film. “Film production tends to be less sensitive to economic hardships than other sectors of the polymer market,” AMI said. “Growth through the Covid crisis was steady and that trend looks set to continue in 2022 and up to 2027 There are also substantial differences between different polymers with films – with sustainability and changing consumer trends driving differential performance.”