The program is certified and registered within the Commonwealth of Pennsylvania and lasts four years with a combination of on-the-job experience and classroom-based instruction. 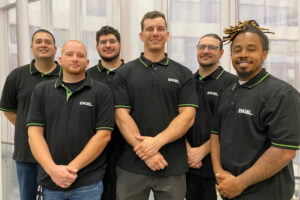 “Within North America, apprenticeship programs are a much-needed addition to any employer’s structure to really support the foundation of the business,” Terri Fanz-Falzone, the company’s vice president of human resources, said in an Oct. 31 news release. “We’re providing students with free, comprehensive training on our injection molding machinery and automation systems so that they’re more than ready to join the team upon completion of the program. And due to our year over year growth, we have a high demand for technicians, so it’s a win-win.”

The apprentice program is certified and registered within the Commonwealth of Pennsylvania and lasts four years with a combination of on-the-job experience and classroom-based instruction. Graduates of the program will receive an offer of full-time non-exempt employment at Engel, as well as the nationally recognized Journeymen’s certification.

“Our apprentices are fully paid during the program, which includes all hours worked as well as the time spent in formalized education,” Fanz-Falzone said. “For the first five months, students will live in corporate housing in York, Pennsylvania, attending classroom instruction for four hours a day and then participating in hands-on instruction for the other four hours with our experienced assemblers. During that time, they’ll develop relationships with the executive management team and gain a full understanding of what Engel is all about.”

After this initial training period, apprentices will then return to live in their own homes and travel to customers with Engel’s field service technicians. Over the four years, students will return annually to Engel’s York headquarters to attend a series of formalized education programs conducted by MASCPA (Manufacturing Association of South Central Pennsylvania).

The program is now in its second round, with 13 apprentices. In 2021, Engel started the first round of its apprenticeship program with a focus on field service technicians. Mechatronics engineer apprentices joined the program in 2022. So far, Engel has received over 1,275 applications, and the company anticipates hiring five more apprentices in early 2023 from across the U.S. and one from Canada.